Well, what do you know?  It’s the Angst-giving Season again and the days are short and getting colder.  At this time of year, as is my way, I look forward to going to bed at night.  It’s a big production.  We live in an 85 year old house with plaster and lath walls, and no insulation.  We keep the downstairs toasty with a beautiful new wood stove, and leave the upstairs bedrooms to fend for themselves and pick up what heat they can manage from the sun, and what heat seeps up through the floors.

The high tomorrow is going to be 34 degrees, and the low tomorrow night will be 17 degrees.  Fifteen degrees below freezing will be keenly noticed by those sleeping in unheated bedrooms.  They must dress appropreately.   One might be tempted to think that this will be inconvenient.  One would be wrong.

This is a bit of a story now,… involving a small cast of characters.  I promise to keep it as short as I can.  You see, two years ago, while floating on her back, backwards, and unrolling the solar cover on top of the swimming pool, poor Mrs. N. felt something “rip” down deep in her innards, and experienced some rather intense pain.  Since that time she found that she was unable to eat, and then bend over, or, lay down without extreme pain after eating.   Like an idiot, the pain was so intense, and against her better judgement, she consulted a physician who prescribed a strong medication intended to greatly inhibit the production of acid in her stomach.  It was his reasoning that poor Mrs. N. had inflicted grievous damage on her diaphragm, and the valve that closes off the top of her stomach.  The one that keeps our stomach acid from rising up our esophagus, and eating nasty holes in our plumbing.   That was poor Mrs. N.’s self diagnosis too.  The only difference was, she did it for free.

The medication prescribed only had a few, slight, side effects.   Nothing to complain about really, but, perhaps worth mentioning.  First of all, 24 hours a day, if felt like someone just punched poor Mrs. N. in the gut, like maybe Mike Tyson.  Second, rather than defecating with the precise regularity of a Swiss watch, as was formally her way, she considered herself fortunate to move her bowels once every week to ten days.  When that magic and much anticipated time came to pass there was no putting it off…  AND, it was wise to inform the workers down at the sewerage plant that… something absolutely astounding was coming their way!  I advised them not to be frightened, but, after the first episode, I don’t think my advice did any good.  Other than that, and this may fall under the heading of nit-picking to some readers, poor Mrs. N. found that she was farting uncontrollably, and at the least appropriate moments.  In the middle of conversations.   On the advice of licensed professionals poor Mrs. N. endured this absurd and painful scenario for months… until her body became accustomed to the medication, is what they strongly advised.

Then came the day… (and I promise I will get back to the story of loving to go to bed at night and the new wood stove.)…  Where was I…?  Oh yes…

…Then came the day Mrs. N. said  FUCK THIS  and threw away the nasty pills.   She ordered a wedge from Amazon.com to elevate her upper fuselage at night, only slept on her back with a pillow under her knees, and never ate a bite after 3:00pm.  Safe, tucked in bed at 9:00pm with Itzie the Cat curled up like a well cooked shrimp on her chest, she slept very deeply, and well.   Positioned on her bed snugly, like an expensive antique pistol would be fit in a custom made velvet lined case, Mrs. N. sailed off to Dreamland promptly at nine.  Her health improved.  She came to love the routine.  Reading a bit before casting off the line and letting the current take her she ended each day by thinking deep thoughts. 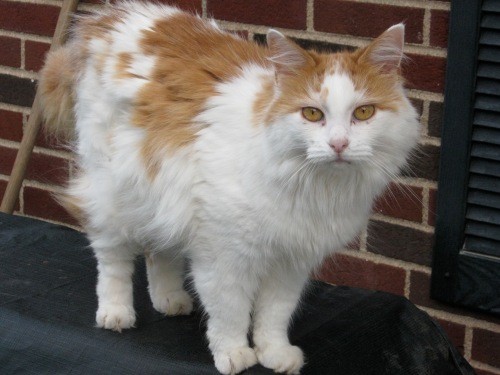 Mrs. N. sailed away last night thinking about how much of who and what she was as a person was the product of her unconscious mind.    Itzie the Cat purred and purred…

Dawn came this morning, and eight hours after falling asleep, Mrs. N. awoke EXACTLY in the same spot she lost consciousness in the night before.  If she hadn’t become accustomed to this happening every morning, over the past months, it would have seemed freaky.   She had, so, it didn’t.

Finding herself with a powerful hankering for mixed nuts Mrs. N. piloted her internal combustion vehicle to the High Temple of American culture.   She went to WalMart.  There she found the two primary poisons that are eating away at the flesh and bones of this once great and powerful republic known as The U S of A.. 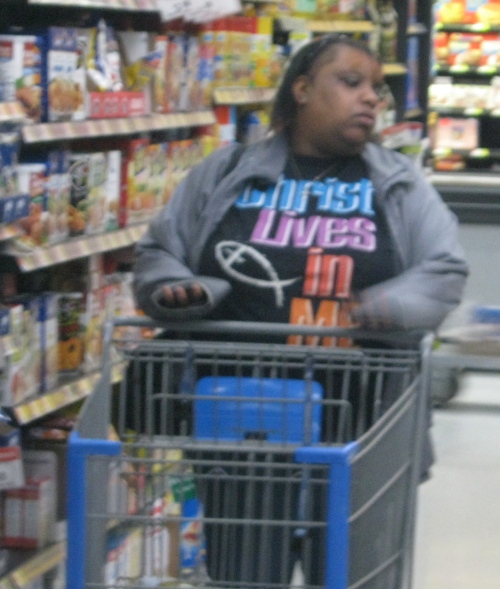 Jesus, it appears, has been swallowed whole by a middle aged black woman.  This explains the strange, Jesus wants you to consume resources, and gather great piles of crap together, turn Christianity has taken as of late.  No one of any competence what so ever is at the wheel of our vast universe.  It’s a runaway train. 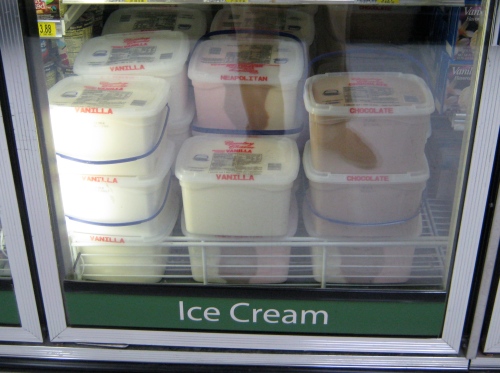 And Gluttony.  What can you say about containers of cheap ice cream large enough to be cornerstones in some frozen construction project, perhaps at one of our two poles?  …”Momma loves nothing more than to sit herself down in front of the TV with her ice cream and a big spoon.”…  And Momma looks it… 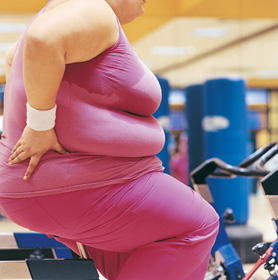 The flags wave proudly over the cash registers down at The Temple of Consumption.  Patriotism is in the air so thick it’s hard to move.  The Christmas Trees are all lined up for sale outside.  It’s more than a month till Christmas.  The “Beautiful People” are nowhere in sight, and the children seem strangely detached, and not at all handsome, or, innocent any more at all.

I Pledge Allegiance to the Stuff, and to the concept, for which it stands.

The bed will begin to call me early tonight I think.  Itzie already has that look in her eye.  As I settle myself into position with the full realization that I will awaken, six to eight hours in the future, in exactly the same physical place.   I realize that I have begun a journey that may end far, far from where it began.  Some nights, after I turn out the lights, I picture myself cocooned in some vehicle, sailing out alone in the vastness of uncharted space.   It’s warm, I’m snug, and I’m speeding on my way to where I know not.  Itzie is sleeping on my chest.  I’m like Sigourney Weaver in ALIEN, after she has jettisoned herself, in the escape pod of The Nostromo.  Except I’m not dressed in panties and an undershirt, and no hideous space creature has been chasing me. 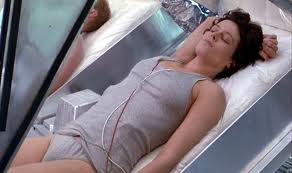 Or, maybe it has, and that is what all this is really about.  A seasonal rehearsal of an escape, from a long standing situation, that can only end badly.  A little death.  Not as anything permanent, but, rather a way to get more comfortable with the whole idea of endings, and being done with seasons when it is obvious they are done with you.

The monsters are always out there.  It’s wise to have some sort of escape craft.  Mrs. N. doesn’t worry because she knows that her and Itzie the Cat will wake up after traveling miles from here, tomorrow morning.  It’s funny how some things that start off as a real pain in the ass can end up being quite enjoyable.  Quite enjoyable indeed.

Mrs. N. lost weight, not that she was fat to begin with, mind you.  She hopes you enjoy the song.